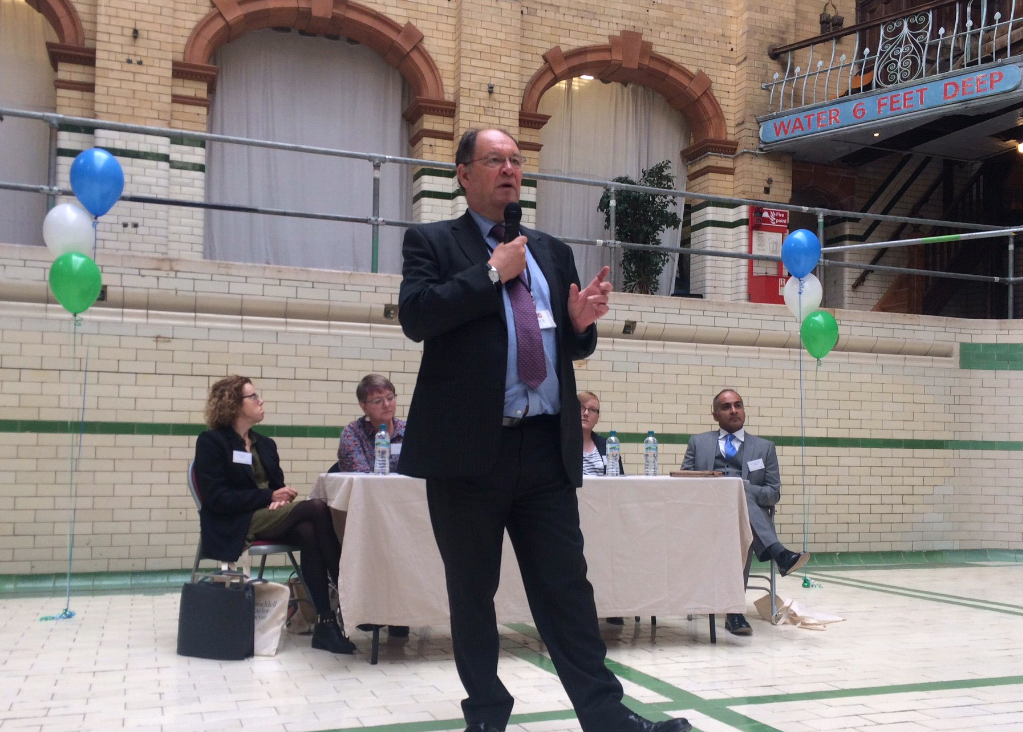 Charities, community groups and services in Greater Manchester gathered in the wonderful surroundings of Victoria Baths on 20th September 2016 to “Meet the Neighbours”! The third outing of this annual event was back with a bang with a stellar line up of speakers including;

Thrilled to be delivering a talk in a swimming pool he had swum in as a child, Jim Battle, Deputy Police and Crime Commissioner, opened the event with an impassioned discussion about the importance of coherence in neighbourhoods but the need for individuals to shape the future.

Councillor Judge, Lead for Woman at Manchester City Council and Chair of the Manchester Domestic Violence and Abuse Forum, described a personal journey that has turned into a mission for change. Councillor Judge captivated the audience with the inspiring local story of Wythenshawe Safe Spots and examples from women they have helped.

As a result of the involvement of WTB Solicitor Laura Hitchen with Wythenshawe Safe Spots, Polly Neate agreed to travel from London to speak at the event. The attendees were treated to a discussion around coercive control, the current plot line in The Archer’s and the need for a focus on change that lasts. The interactive, energetic discussion included a focus on coercive control in song lyrics and Polly loved Victoria Baths describing it as “interesting and also bizarre”!

More used to court rooms than swimming pools, Zia Chaudhry MBE’s amusing, thought-provoking talk had the audience captivated. Challenging preconceptions about Islam, the subtleties within communities and also how integration needs to work both ways his talk was fascinating and left everyone thinking.

Dr Kate Cook, another former swimmer at Victoria Baths, brought the proceedings to a close with her talk “Living up to the Pankhursts”. The talk included a quick walk through the life of Sylvia Pankhurst, a discussion about coercive control, FGM and the role of local charity Safety for Sisters.

Partner, Ben Taylor, says “The event was fantastic. As a firm, WTB Solicitors LLP, have always had a real sense of social responsibility and have ensured that we are active in the community through events like today, our free legal aid assessment clinic or delivering talks and training to charities and community groups. I’m proud of what we have achieved and looking forward to what the next year will bring.”

Solicitor, Laura Hitchen, who came up with the concept said “Meet the Neighbours has really grown which demonstrates the need for up to date information and the desire to make connections across the third sector. We had over 130 people sign up this year; around three times as many as attended the first Meet the Neighbours in 2014. It’s a real feel good event, despite the challenges facing both the charitable and legal aid sectors through cuts to funding.”